- October 24, 2016
Reproduced below is the complete rebuttal of Mr Ashok Mohanani to the draft press release that we emailed to him on 20th October, 2016. This press release was titled Ekta Builder: Broken Promises & Bhai-giri.

At the onset, I appreciate you giving us additional time to send across our response. As discussed, please find our point wise reply to your draft Press Release dated 20th October, 2016 ;

With reference to Para 1 of your allegations pertaining to Ekta Group/Ekta World/it’s PR Campaigns, we deny all these allegations, insinuations and contentions contained therein and state that Ekta as a brand is in the market since last more than 29 years and is non for it’s consistent quality and excellent customer service. Today, we are proud to state that there are more than 14500 happy families across the Mumbai and other areas including Pune and Nashik.  We further deny that the PR Campaigns, Websites etc all are smokescreen and there are no safeguards and/or no legal entitlements. I am disheartened that a journalist and activist of your repute is relying only on the one sided story based on the details provided by one customer and without knowing the complete facts of the matter and contemplating on publishing theses on public forums that will cause grievous harm to our untarnished reputation.

We refute all the allegations made by this customer and state that the said Mr Vineet Malik had an ample opportunity to get all the clarities on the Agreement clauses prior to the registration of Agreement for Sale and when he visited in our Bandra office, he sought explanation of queries as regards the Agreement for Sale. Further, the booking was done by him alongwith his mother however, prior to registration he has requested to remove his Mother’s name from the booking and register the said Agreement only in his name.  For this, purpose, an indemnity bond had been taken by us from Mr. Vineet Mallik. Had he not requested us to change the name, then we would have not taken an indemnity bond. Please note that since September, 2012 and time and again thereafter, Mr. Vineet Malik was intimated to register the Agreement. However, for reasons best known to him he chose to register the Agreement only on 30th May 2016 i.e. approximately after 4 years.

We refute all the claims made by you as regards brochure and Flat Purchase Agreement of Ekta Parksville. You must be aware that the Agreements for Sale are not prepared by the Developers themselves and the same are drafted by highly reputed Solicitors. Our Agreements are in accordance with the provisions of law. Therefore, all the claims as regards Bhai Giri and rosy promises etc. are denied by us in to-to.

As has been already referred hereinabove, it is correct that Mr.Vineet Malik applied for a Flat in the end of year 2011 and his first demand was that of 2011 on the completion of the 1st Slab.  However, it is common sense that in such a larger layout dates of Possession are given considering all the perspectives such as completion of construction of Common Amenities, formation of Society / Apex body and other force majeure conditions and therefore, it is impossible that anyone can promise possession of the Flat within 2 years i.e. by December,2013 as purportedly claimed by Mr.Vineet Malik. We have never communicated to him such date. It is not the case that the Developer was not interested in registering the Agreement for Sale, on the contrary it was Mr.Malik who had chosen to register it only in the year 2016. In fact had this been true then Mr. Vineet Mallik should have not signed the Agreement in 2016. A logical person would have asked for refund of the money. Further, thereafter also whenever we and our staff tried to call him and message him all his calls and messages remained unanswered. We deny all the allegations leveled by Mr. Malik in para 2,3 and 4 in to-to and state and submit that the purchasers are entitled to the amenities promised under the Agreement. This seems to be story authored by Mr. Mallik to taint our name.

As regards the allegations and contentions raised by Mr.Malik in Para -5 of your press release under the head “The Story of the Flat Buyer” - as has been already explained in the earlier paragraphs hereinabove, the possession was never agreed in the year 2013 and prior to registration of the Agreement, the hardcopy of the final MOFA was sent to the purchasers house in Gurgaon. Infact the correct date of possession has been mentioned in the Agreement.. However, the said Mr.Malik have chosen to remain silent till then and had also registered Agreement at his convenience and immediately thereafter initiated defaming Ekta through media and on various public platforms such as Facebook and other digital & print media for the reasons best known to him. We state and submit that there is no cheating or coercion applied on the said Mr.Malik and if he was so disturbed and dis-satisfied by the services offered by Ekta then he should have taken steps towards cancellation of his bookings by asking for refund or compensation.

For your immediate reference, we are annexing herewith photographs of the current status of the construction of Brooklyn Park F Wing, which will clarify that the photographs given by Mr.Malik are far away from the facts also sending you most recent images of his flat.

Trust you would act in fairness and stay true to your commitment to serve public interest (in the true sense). Assuring you our complete co-operation as always.

Further to your email dated 20th Oct 2016  we would be delighted to meet you at a mutually convenient date, time and location to further discuss this and provide you with any further details that you may wish to seek in this regard.  We will be represented by Mr. Chinmay Gerasappa – Chief Sales Officer - Ekta World and Ms.Deepti Nair – AGM (Media, Marketing & PR) Ekta World 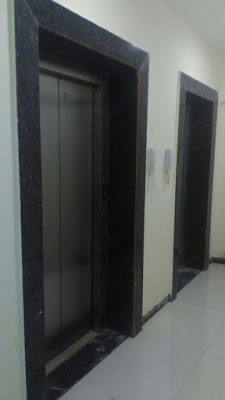 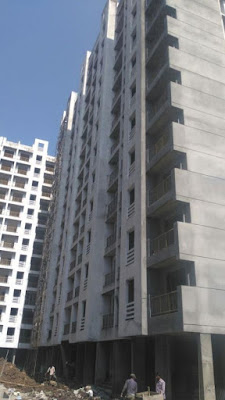 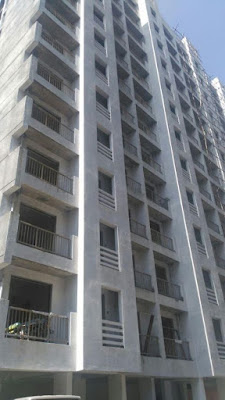 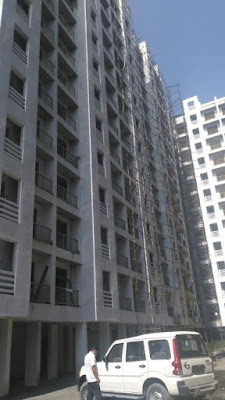 
[Note: In addition to the above four photos given as inline graphics, this PDF file of demand notes issued to flat purchaser Vineet Malik was attached.

Also sent as attachments were the below 9 photos showing current status of the construction of Brooklyn Park F Wing, taken today (October 24, 2016) with the masthead of today's Times Of India shown as proof of date. 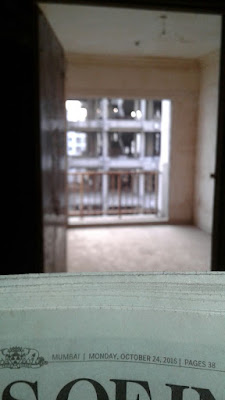 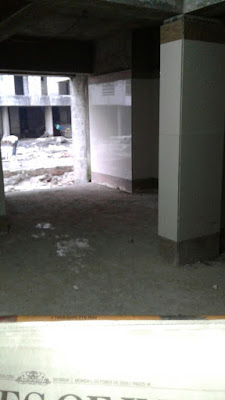 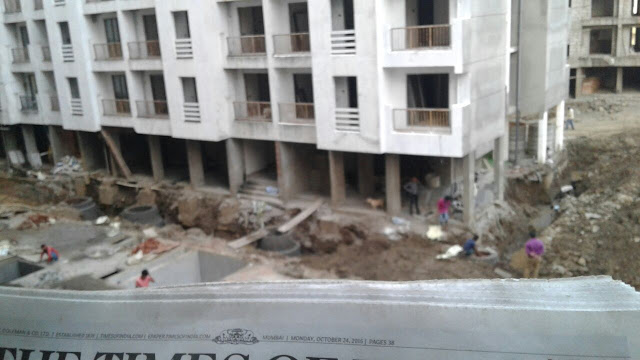 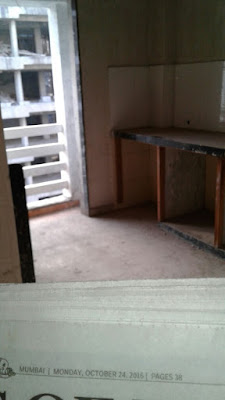 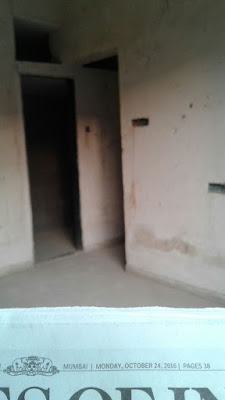 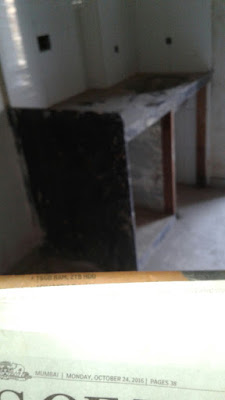 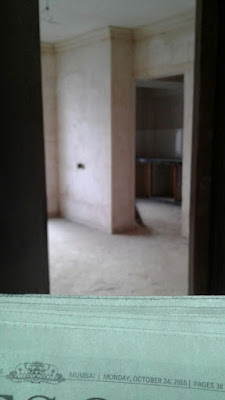 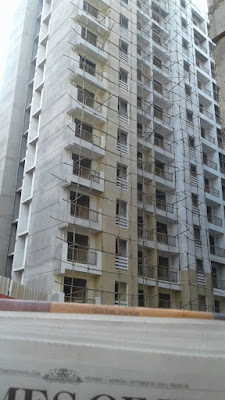 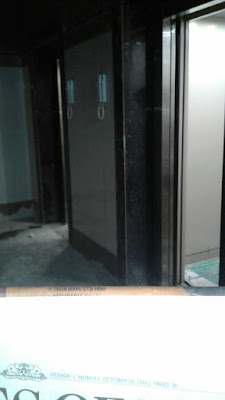 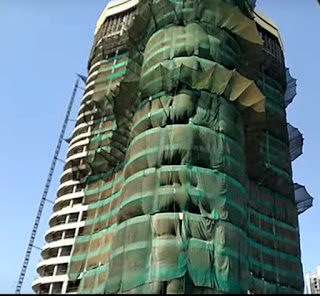