Showing posts from December, 2015
Show All

Indian Judiciary: Too much power, too little justice 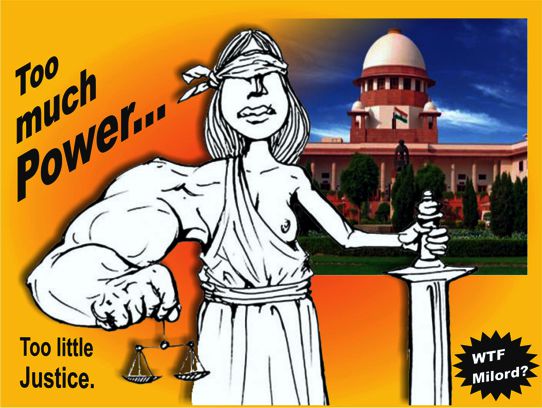 How many people get justice through the judicial system in India? Probably much less than 1%. The judicial system is so formal and technical that a common person cannot access it without the costly help of lawyers. Less than 20% of people can afford lawyers. The 78% (according to the Arjun Sengupta Committee report) who live on less than Rs 20 per day obviously cannot afford lawyers.

Even those who can access the judiciary through lawyers are usually frustrated by the long, laborious and expensive process which takes years or even decades to conclude, during which the litigant gets exhausted- physically and financially.

Many of those who get their cases heard relatively quickly, are faced by uncaring, incompetent or corrupt judges. Such people lose their faith in justice itself.


Thus, those who finally manage to get justice from the system are probably far less than 1% of the population.